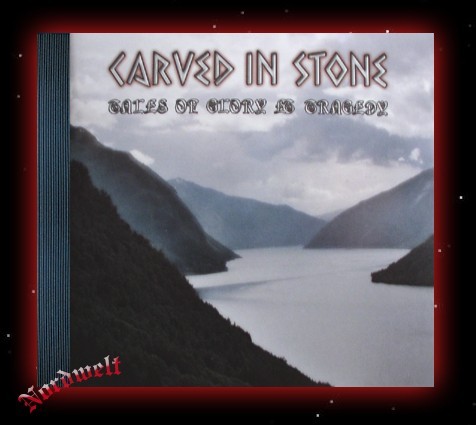 Description Evaluations 0
Description
Carved in Stone is the solo project of the artist Swawa, who worked in the past as a keyboardist... more
Close menu
Product information "CD Carved in Stone - Tales of Glory and Tragedy, music CD"

Carved in Stone is the solo project of the artist Swawa, who worked in the past as a keyboardist and singer in various metal bands before she joined Taunusheim.
Following successful releases in 2001, The Forgotten Belief and Hear the Voice in 2004, CARVED IN STONE is back in the fall of 2007 with the second longplayer titled Tales of Glory & Tragedy. The album was recorded again in cooperation with Schwarzdorn Production.
Stylistically, singer Swawa has remained true to her mystic folk, and so Tales of Glory & Tragedy includes a new collection of unique ballads and tales embedded in the atmospheric sounds of acoustic instruments.
Merciless fates, almost forgotten creatures and fallen heroes accompany the listener who follows them through another time and another world in which human knowledge seems to play no part.
The appropriate layout for "Tales of Glory & Tragedy" is again by HvemSkulle, who was already responsible for the visual design of the two predecessors and also succeeds in this work again to create a perfect harmony between music and optics.