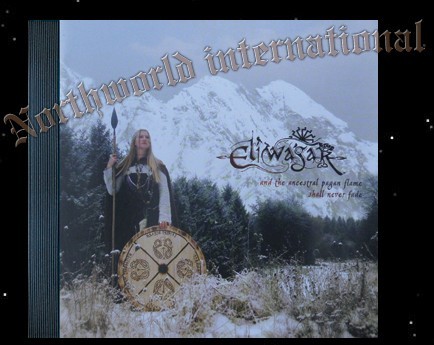 Music CD Eliwagar - And the ancestral pagan flame shall...

Runahild Håleygir started Eliwagar in December 2006 during the winter solstice. At that time she lived in Lorraine and recorded several demos and 3 official CDs. In February 2010 she went to Norway, back to her roots and heritage. The north called them stronger and stronger the more time passed. She went to an organic mountain farm in the winter and met Bjørn, who became the guitarist for her project ...

This lifestyle in a mountain farm gave Eliwagar a great deal of meaning and existence. The ideology behind Eliwagar is back to nature and back to the roots of living in great harmony with Mother Earth and Father Sky. The lyrics of Eliwagar are about the love of the motherland, the family and the loved ones, and the ancient Nordic heritage that seemed almost forgotten. Contrary to those who call themselves Asatru (the belief in the Asen gods) is called Runahild Vanafolk (the people of the Vanir), since the Vanir are the oldest gods in Norway and the north. They have a real strong connection to the northern countries for them. The Vanir gods are not only the gods of fertility and rich harvests, nature, love, family and heritage, but also death and ancestry. They are the gods of a time when people lived in harmony with the motherland and with each other and each family had their own farm and freedom and were proud of their heritage and their ancestors. The energies of the Vanir and the society they represent are the strongest source of inspiration for Eliwagar's music. Runahild describes her music: