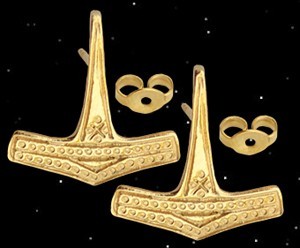 Earring Earstuds "Thorhammer from Bornholm" made of 585 gold

Earring pair "Thorhammer from Bornholm" made of gold 585.

Thor, who was the strongest of all the ancient Norse gods, was very revered. God of storms and lightning, Thor killed trolls and man-eating giants and ensured good harvests.
Thor, son of Odin and Jord, was given two sons, Magni and Modi, by his wife, the giant Jarnsaxa.
Thor rules in the Bilskinir Hall, his palace in the realm of Trudhome, and he proudly carries his Mjölnir hammer. The "Thorhammer" was once forged by the dwarves Sindri and Brokk.
Thor draws his strength from his belt Megingjardar and his iron hand Jarngreipr.
As today, the Thorhammer was worn for centuries by pagan people to protect them from danger. The Thorhammer is THE symbol of pagan belief.

Replica of Thor's Hammer found at Rømersdal on the island of Bornholm. The original Thorhammer dates from around the 10th century.

The The X-Cross (Malkreuz ) in the shaft with the four dots could represent the increase through fertility in the four seasons.

The X-Cross (Malkreuz )
The Gifu / Gebo Rune (X) stands for Marriage, Augmentation/Increase, and Gathering/Procreation-Union/Generating-Combination.
The X-Cross (Malkreuz ) is a symbol of “the earthly (human) generation and creative power”. It binds the forces of “You & I” in sacred marriage. It leads to “cosmic consciousness”, to the “seeing of God”, to the “unio mystica“, to “becoming one with the cosmic Ur-Ground (the Primordial Cosmic Cause)”.