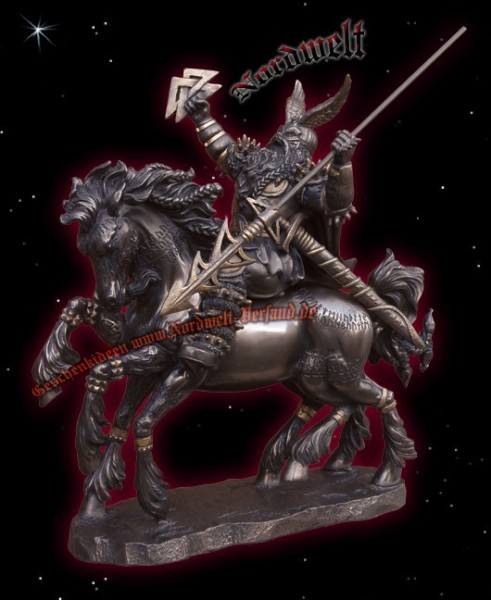 Odin on Sleipnir, figure / statue, bronzed, made of polyresin

Description Evaluations 0
Description
The figure was made and cast in Polyresin (caststone). The figure is fully filled and covered... more
Close menu
Product information "Odin on Sleipnir, figure / statue, bronzed, made of polyresin"

Odin is the Highest God of the Aesir, the highest and First among the Gods. God of Poetry, Science and Knowledge, of
High Magik, of the Heavens, of Wars and the God of the Dead.  As the God of Storms, he is also the leader of all
Armies.  Odin, the finder of the Runes, God of the knowledge and mysteries of the Runes, and the God of Protection of all the Skalden.
Odin, the Allfather, the Son of Burr and the gorgeous Bestla. Together with his brothers, Hönir & Lodur, Odin created the first pair of humanity; Askr and Embla, and gave them Souls.
He sits upon his throne; Hlidskialf in the Walaskialf Hall, in the Mountain of the Gods; Asgard, from which he can see the entire world, and gaze upon all things.
He is all-seeing, all-knowing, of things said and things done. On the side of Odin stand the Raven Hugin (Thoughts) and Munin (Memory). It is they, who every morning recite the details of their travels. They provide Odin a report of the new things of the world, from where ever they travelled. Also accompanying Odin are his two wolves; Geri (The Greedy) and Freki (The Ravenous).
With his 8 legged stallion; Sleipnir, he rides against the Powers of Darkness!
Odin offered up his left eye to his Uncle Mimir in order to be allowed to drink from the Well of Truth and of the Mead of Odroerir, which is Poetry."
He owes his vast wealth and riches to His golden ring, Draupnir (The Dropper), from which every nine days it drips another eight rings. In battles and wars, he owes much to Gungnir, his spear, which never misses the target at which it is thrown.
So, Odin is not only the God of the fallen brave in Valhalla, he is altogether the God and Leader of the Dead.
This is also expressed in the older myths of the wild hunt, in which all dead spirits under guidance of Odin rides through the night in search of their quarry.
Among His followers are 13 Ghostly Women Warriors, known to us as the Valkyrie (Valkyrjar), and the souls of fallen warriors. Those who perished valorously on the field of battle also called Einherier, in Old Norse.
These brave shades live forever more in Valhalla, also known as the hall of the fallen. This lustrous Hall is in Gladshome, the place of joy.
In front of Gladshome stands the Hain Glasir. The grove (Hain) of Glasir has trees that are filled with leaves of gold.
Over the main door of the Hall, which was so high that one could see hardly its gables, hung as a symbol of war a wolf over an eagle.
The walls of the Hall were covered with shields over spearshafts. The Hall had 540 doors, by each of which 800 honorable dead stride along, waiting for the great battle with the Fenris Wolf (the warriors collect themselves for the final battle of all battles: Ragnaröck).
For these courageous ones, which came after death to the Walstatt to Odin, they will all play a part. Under Odins presidency the Valkyries give generous portions of Mead.
Related links to "Odin on Sleipnir, figure / statue, bronzed, made of polyresin"
Evaluations 0
Read, write and discuss reviews... more
Close menu
Customer evaluation for "Odin on Sleipnir, figure / statue, bronzed, made of polyresin"
Write an evaluation
Evaluations will be activated after verification.