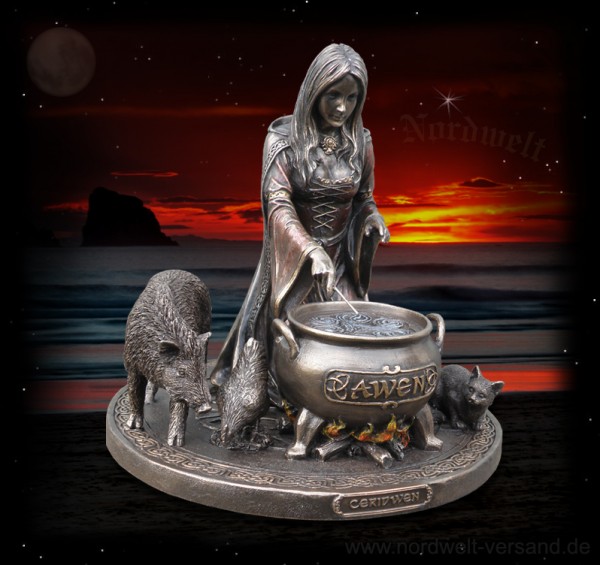 Ceridwen, Celtic-Irish goddess of the moon, bronzed, made of polyresin

Description Evaluations 0
Description
Ceridwen (Cerreidwen) Celtic-Irish goddess of the moon, goddess of fertility, life-and-death... more
Close menu
Product information "Ceridwen, Celtic-Irish goddess of the moon, bronzed, made of polyresin"
Ceridwen (Cerreidwen) Celtic-Irish goddess of the moon, goddess of fertility, life-and-death goddess of death.
Goddess Ceridwen, a druid priest, possessed great powers of magic and brewed in her cauldron the potion of knowledge intended for her ugly son Afangdu. The potion had to cook for a year before and was guarded by the boy Gwion Bach. Ceridwen did not allow the guard to drink from it. But while cooking, some of the tropics splashed on the potion on Gwion's finger. He licked his fingers and gained thereby great knowledge and knowledge. Ceridwen became angry and sought Gwion, who tried to hide from her as a figure-shifter.
When Gwion had turned into a grain, Ceridwen quickly turned into a chicken and picked up the grain. Taliesin grew up in her womb, causing her to reincarnate.
Made and cast from polyresin (artificial stone). The figure is fully poured and not hollow and covered with real bronze.
Dimensions: