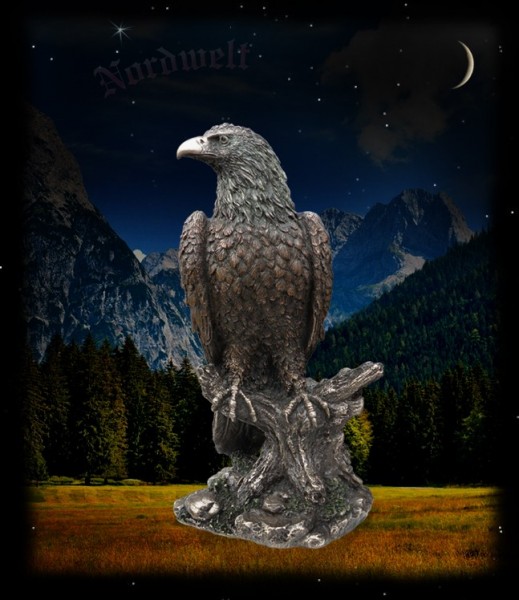 Eagle- Hräsvelg - Guardian in the world ash, made of artificial stone (polyresin)

The Irminsul (from irmin = mighty, divine, large and sul = pillar) or also Irmens pillar was an old Saxon main sanctuary - and will have been a large oak or wooden pillar.
Its exact location is unknown, but it was probably near Eresburg near Obermarsberg ( in Germany), as the formulations in the Annales regni Francorum ("Franconian Imperial Annals") suggest in 772.
Other possible locations include a. the Externsteine ​​and the Velmerstot. The Irminsul was destroyed by the Franks at the instigation of Charlemagne in 772 during the Saxon Wars.

They (sc. The Saxons) also worshiped a block of wood (or: tree trunk) of no small size that had been raised upwards, which they called "Irminsul" in their mother tongue - which in Latin means "all-pillar" "means, since it carries the universe in a way.

A (rest) version of an Irmin column, apparently of Roman origin, is now in the Hildesheim Cathedral in Lower Saxony (Germany). A reference to "the" Irminsul is unclear. Incidentally, nearby are the towns of Irminseul / Irmenseul, Segeste, the Drachenberg (Dragon mountain) and the Wormstal - which could even indicate the song of the Nibelungen.