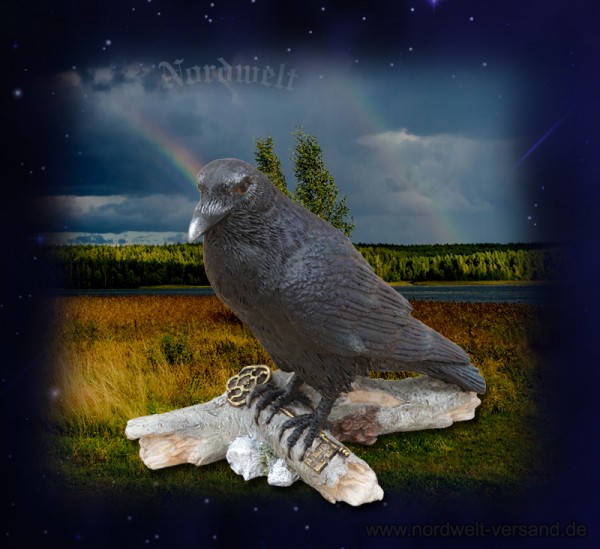 Odin's raven sitting on key and branch. Made and cast from polyresin (artificial stone).

Hugin and Munin are Odin's ravens.
Odin is also u.a. known under the name Hrafnáss (raven god).
His two ravens:

Hugin (Icelandic: Huginn) belongs to the Old Norse verb huga and means translated: think / thought. Hugin thinks about everything he sees and draws his final sentences from it.
Munin (Icelandic: Muninn) belongs to the Old Norse verb muna and means translated: remember / the memory. Munin remembers everything he saw.

Together they fly through the worlds and in the evening they return to Odin and tell him what they have seen and heard.
In the Norse mythology are regarded as mystical and magical beings, which among other things can differentiate lie and truth from each other.
The symbol of the key can be found in various fairy tales, myths and legends and so on. He often finds his meaning in connection with something forbidden, not to open a locked door behind which hides a secret. The fairy tale "The Golden Key" by the Brothers Grimm also recalls the meaning and the "power" of the key.

The pictures show the view from the front and back.