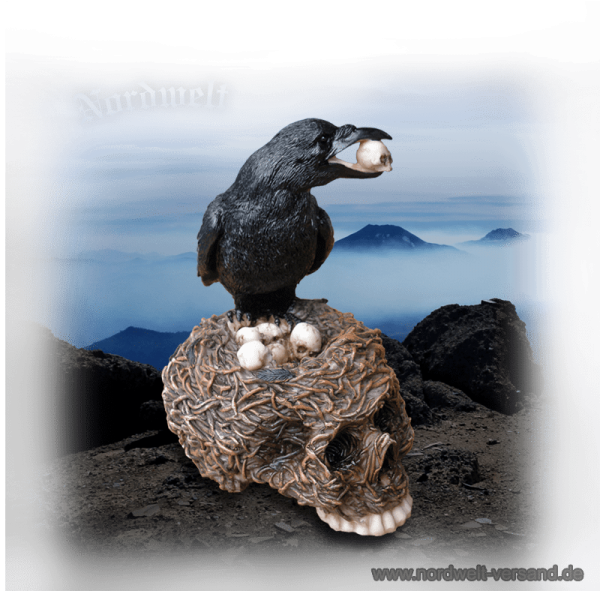 Odin's raven in the nest with skull, messenger of the gods Wotan's bird / Dead bird, made of polyresin

Description Evaluations 0
Description
The raven - Wotan's deathbird, soul and path companion to the "otherworld" - made / cast from... more
Close menu
Product information "Odin's raven in the nest with skull, messenger of the gods Wotan's bird / Dead bird, made of polyresin"

The raven - Wotan's deathbird, soul and path companion to the "otherworld" - made / cast from polyresin (artificial stone), and lovingly painted by hand.

The magpie also belongs to the group of raven birds. In Nordic mythology, she is a messenger of the gods, but also a companion bird to the goddess of death, Hel.
The Celtic war / death goddess Morrigan carried the souls of fallen warriors to Valhalla in raven form.

The origin of the earth is described in the gods song “Vafþrúðnismál”.
Ginntagap is described as the empty space at the beginning of world events. In prehistoric times, before creation, Gnungagap lay between the glowing Muspellshome in the south and the icy Niflhome in the north.
Before the world was created, there was nothing but the Ginntagap, in which the first being called “Ymir” lived - the world was formed from the individual parts of Ymir's body. The earth was made from his flesh, the sky from the skull, the mountains from the bones, and the sea from the blood. We therefore do not consider the skull / skull as something creepy, because like everything else it is part of creation.

The raven is considered a connection to gliding over into the "world of the dead" - its intelligence, magical powers and clairvoyant abilities make it a dead bird, soul companion and companion in the "other world" par excellence.
God of death Odin is also known as Hrafnáss (raven god).

In popular belief, the raven bird became the eerie and unfortunate dead bird. This bad reputation arose particularly from the Christian influences during the Middle Ages.
Hand-painted, made from polyresin (artificial stone)