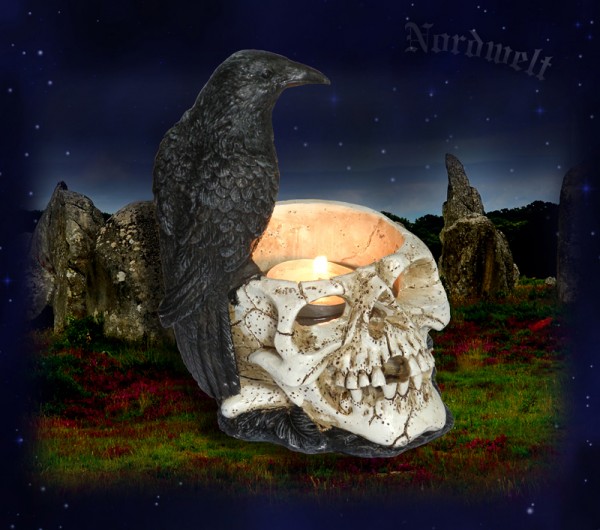 This product is currently not available.

Odin's raven sitting on skull, tealight holder, made of polyresin

Odin's raven sitting on skull. Made and cast from polyresin (artificial stone).
Odin is also u.a. known under the name Hrafnáss (raven god).
His two ravens:

Together they fly through the worlds and in the evening they return to Odin and tell him what they have seen and heard.
In the Norse mythology are regarded as mystical and magical beings, which among other things can differentiate lie and truth from each other.
In the song of the gods "Vafþrúðnismál" the origin of the earth is described.
Ginnungagap is described as the empty space at the beginning of world events. In primeval times, before the creation, Ginnungagap lay between the southern, glowing Muspellshome and the icy Niflhome in the north.
Before the world was created, there was nothing but the Ginnungagap, in which the first being with the name "Ymir" lived.
The world was formed from the individual body parts Ymirs. From his flesh came the earth, from the skull the sky, from the bones the mountains, from the blood the sea. Therefore, we do not consider the skull or skull as something scary, because like everything else it is part of the creation.

Photo of two sides.
Price is for a raven tea pot holder with a tealight.