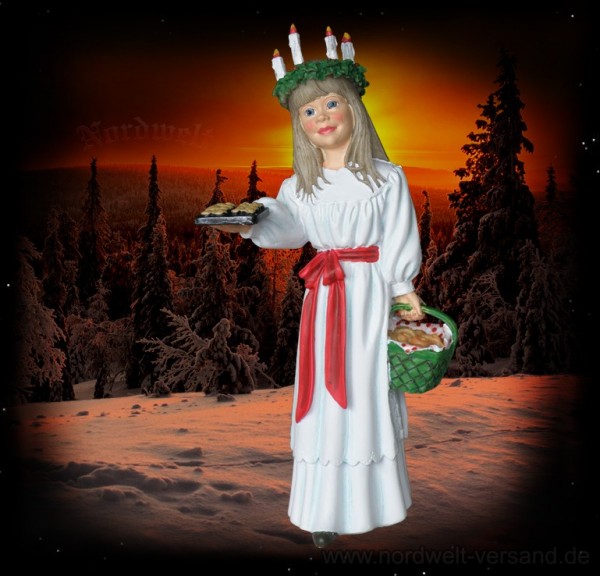 Description Evaluations 0
Description
The Lucia Festival in honor of the goddess of light Lucia is a long past custom and NOT of... more
Close menu
Product information "Light goddess Lucia with pastry sheet, (large version) made of polyresin"

The Lucia Festival in honor of the goddess of light Lucia is a long past custom and NOT of Christian origin.
Among other things, celebrated in Sweden, Denmark, Norway, and Finland. Also in Germany and in many other countries the Lucia tradition is spreading more and more.
The festival is celebrated on December 13, which was the shortest day of the year before the Gregorian Calendar was introduced.
Ultimately, the Lucia Festival is in the tradition of older solstice celebrations.
The solstice celebrations, the burning fires at Ostara customs, " large / high Maien customs", summer and winter solstices, and thanksgiving (same day and night) are primarily of "Nordic" origin. The northern peoples also celebrated Jul as the birth of the sun, in which the sun was represented by large wheels, burning wheels were allowed to roll down mountain slopes.

The winter solstice is the beginning of the 12 consecutive nights, the time of the "wild hunt" in which the godfather Odin roars around the world with his army of dead.
The Lucia Festival is also closely related to the sun. The rebirth of the sun goddess Lucia is still a tradition in some Scandinavian countries and is celebrated with a large festival of lights.

Lucia made of artificial stone (large version) with pastry tray in hand,