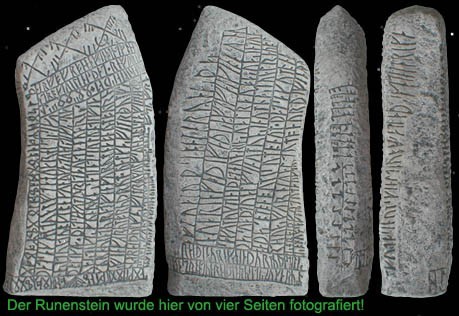 Description Evaluations 0
Description
The Rök rune stone is the most famous of 2,000 Swedish rune stones. It is 3.82 meters high and,... more
Close menu
Product information "Runestone of Röck, Ostergötland (Southsweden) made from artificial stone"

The Rök rune stone is the most famous of 2,000 Swedish rune stones. It is 3.82 meters high and, with around 800 rune signs, bears the longest rune inscription in the world.

The stone was probably built around the middle of the 9th century. 200 years later it was walled into the tithe barn in the course of Christianization. When the old church was torn down in 1840, it was noticed that the stone was covered with runes, but it was walled into the porch of the new church, taken out again in 1862 and initially placed in the churchyard until it was protected with a roof in 1933 has been.

The first line on the front of the stone reads "Aft Vuamod standa runar thar" ("These runes are in memory of Vamund") and then continues: "But Varin wrote them after the dead son."
The following text seems to be about myths. The rune text only becomes understandable when it becomes a verse and the rune master is obviously anxious to pass on the poem in an understandable way:

The back is only partially decipherable. There is talk of 20 kings in Zealand or 20 sea kings and of a battlefield on which they lie, and there is a report of a woman who sacrifices herself for Ingvald's sex

Made from artificial stone.