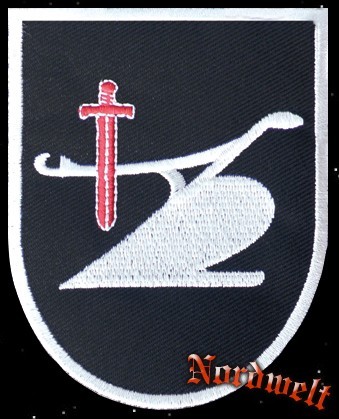 Patch "farmer's flag", with embroidery in white and red on black fabric.

The plow as a symbol of work and the red sword as an expression of military ability!
The symbol is much more than just a protest flag, and not just for the peasant people.
The Freedom Driving is reminiscent of the rural people's movement, which developed into a protest and revolutionary movement in 1928.
The protest movement manifested itself through demonstrations against the authorities, even the tax boycott was organized.
The black peasant flag carried by the revolutionary idea with the firm will for freedom.
The dark men of that time sowed social grievances,
tens of thousands of farmers mowed everything down.
In his hand the peasant's flag, which flies in the storm as a symbol of the will for freedom.