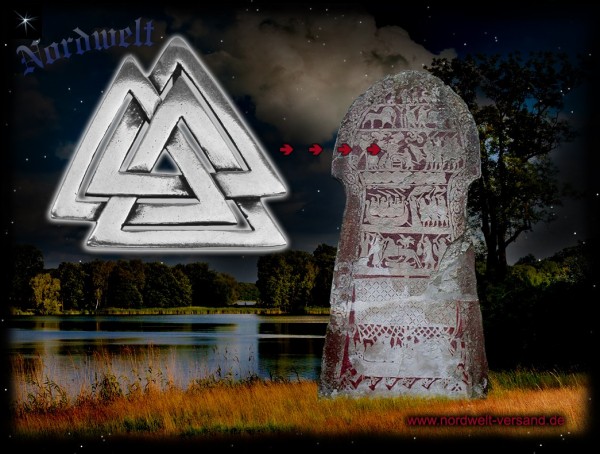 The three intertwined triangles of the Wotans knot symbolize the structure of the Nordic cosmos. The triangles embody the three levels Asgard (world of gods), Midgard (world of people) and Utgard (underworld). The nine corners represent the nine worlds Asgard, Midgard, Hel, Jötunhome, Lichtalfhome, Muspelhome, Wannahome, Swartalfhome and Niflhome.
The Wodans knot is also a sign of fate. Like the three Norns, it stands for the past, the present and the future.
Historically, the Wotans knot is documented, for example, by the picture stone from Tängelgårda from the 7th century.

The Wodans knot is also depicted on the Stora Hammer rune stone.
The Wodans knot, or Wotans knot, was often presented in connection with the battle and death in pre-Christian times.

The guardian at the Gjöll River (Death River) is Modgudr, she stands on the afterlife bridge Gjallarbrú, which leads to the realm of the Hel.
The name Modgudr is made up of the old Norse noun “mord” (ectase / anger / enthusiasm) and the syllable gud (God).
Modgudr is thus a goddess of ectase, just as Odin is the god of death and god of ectase. The ferryman on the river could also be Odin, just as a companion on the afterlife.