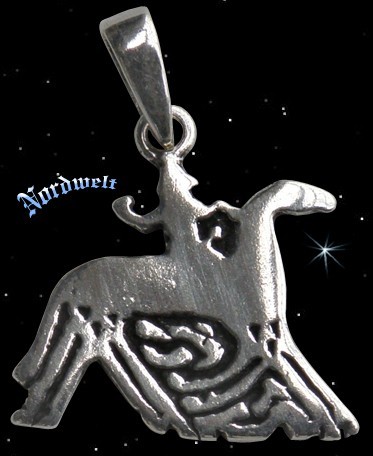 "Odin on Sleipnir", pendant made of 925 silver

Description Evaluations 0
Description
He is the god of the Ases, supreme and first deity, god of poetry, knowledge, magic, god of... more
Close menu
Product information ""Odin on Sleipnir", pendant made of 925 silver"

He is the god of the Ases, supreme and first deity, god of poetry, knowledge, magic, god of heaven, war and the dead. As a storm god, he is the leader of the Wotan army.

Odin, the finder of the runes, god of rune wisdom and patron god of the skalds.

Odin, the Allfather, son of the Burr and the Giantess Bestla. Together with his brothers Hönir and Lodur, Odin created the first couple, Askr and Embla, and gave them the soul. He sits on his throne Hlidskialf in the Walaskialf hall in Asgard Castle and can watch the whole world from there. He is all seeing what is said and what is being done. At the side of Odin are the ravens Hugin (thought) and Munin (memory), who return every morning from their trip to report Odin news from the world. He is also accompanied by the two wolves Geri (greedy) and Freki (voracious). With his eight-legged stallion Sleipnir he rides against the powers of darkness!
Odin pawns his uncle Mimir to drink the Met Odrörir from the Truth Fountain. He owes his wealth to his golden ring Draupnir, from which eight more rings drip every nine days. In battle he relies on the Gungnir spear, which never misses the target.
The mythical wife of Odin is Frigg, whose old German name Frija is identical to the Norse goddess Freyja. Frigg is also identified with Freyja in the Edda. His wife bore him the sons Thor, Balder and Tyr.
So Odin is not only the god of the fallen in Valhalla, but generally the leader of the dead, as the older myth of the wild hunt expresses it, in which all ghosts ride through the night under the guidance of Odin.
His entourage are 13 ghost warriors, the Valkyries (Valkyrjar), and the souls of the fallen warriors, the Einherians, who live in Valhall (Hall of the Fallen).
This gleaming hall stood in Gladshome, in front of it the Glasir grove, the trees of which bore golden leaves. Above the main door of the hall, which was so high that you could hardly see its gable, a wolf hung as a symbol of war, an eagle above. The hall itself, covered with shields over spear shafts, had 540 doors, each of which 800 people walk through when it comes to the great fight with the Fenriswolf (the warriors gather for Ragnaröck). He was destined for these brave men who came to Odin on the Walstatt after death. Under Odin's chairmanship, the Valkyries pour out the mead.

The motif can be found on the picture stone by Tjängvide from Gotland in Sweden. One can see on it Odin on his eight-legged horse Sleipnir.
The stone is labeled with the younger 16 Futhark (Norwegian-Swedish rune series) with the inscription "raisti stain in ift iurulf bruþur sin"!

The skull and crossbones depicted, with the Valkyries possibly standing on them, sailed to Valhalla with the dead.

The guardian at the Gjöll River (Death River) is Modgudr, she stands on the afterlife bridge Gjallarbrú, which leads to the realm of the Hel.
The name Modgudr is made up of the Old Norse noun “mord” (ectase / anger / enthusiasm) and the syllable gud (God).
Modgudr is thus a goddess of ectase, just as Odin is the god of death and god of ectase. The ferryman on the river could also be Odin, just as a companion on the afterlife.

This pendant “Odin on Sleipnir” is a detail from a picture stone and it is up to us to let this religion come to life again.