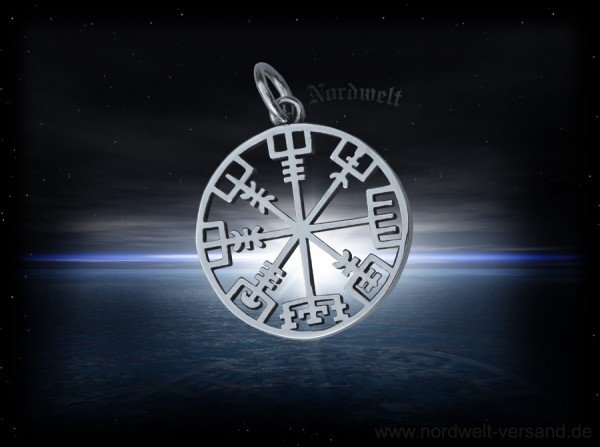 The Vegvísir is a mystically magical symbol that should probably be a "guide through life" - or it represents it!
There are various assumptions about the meaning and structure of the symbol.
The symbol is known from the Huld manuscript from around 1880. An assignment to the Vikings is controversial and has not yet been proven.
The center of the eight spoke symbol, which looks like a Hagal rune, stands for the "I".

Among other things, suspects that these could be the 9 worlds from Nordic mythology:

The Huld manuscript was not written until hundreds of years after the end of the Viking Age.
The manuscripts say: "If this sign is worn, you will never get lost in storms or bad weather, even if the way is not known."
The word "Vegvísir" comes from the Icelandic language and means signpost!
We do not find a clear indication of where the symbol came from in the Huld manuscripts, nor is it attributed to the early Middle Ages (or possibly even earlier times).
It is also not clearly known whether it is used for navigation on e.g. Ships was used.

We therefore deliberately keep ourselves covered here, since no provable evidence has so far been provided.

The magical charisma, power and strength of the symbol can hardly be denied!
Stainless steel jewelry pendant - highly polished.