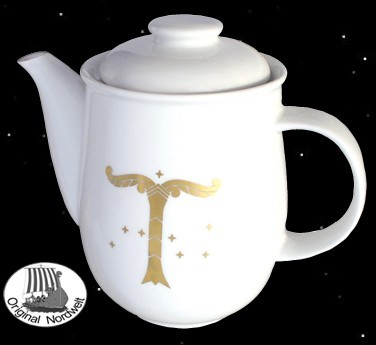 They (sc. The Saxons) also worshiped a block of wood (or tree trunk) of no small size that had been raised upwards, which they called "Irminsul" in their mother tongue - which in Latin means "all-pillar" means because it carries the universe in a way. "
A (rest) version of an Irmin column, apparently of Roman origin, is now in the German city of Hildesheim in the Hildesheim Cathedral. A reference to "the" Irminsul is unclear. Incidentally, nearby are the towns of Irminseul / Irmenseul, Segeste, the Dragon mountain and Wormstal, which could even indicate the Nibelungenlied.

Dimensions of the jug:

With the Nordwelt logo under under the coffee pot!

Fur slippers "Hrimthursar", brown, made of...
€9.95 * €15.90 *
Details ansehen
Viewed
This website uses cookies, which are necessary for the technical operation of the website and are always set. Other cookies, which increase the usability of this website, serve for direct advertising or simplify interaction with other websites and social networks, will only be used with your consent.
Decline Accept all Configure