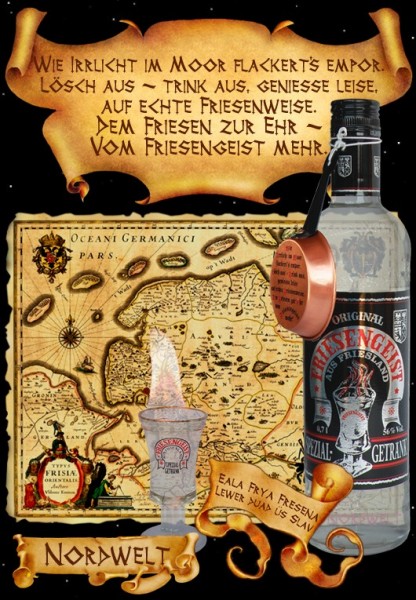 23,67 fl oz  (700 ml) bottle; 56% vol. The bottle is delivered together with a small "fire pan". Without glass and without the decoration shown.
In honor of the Frisians, more of the Frisian spirit! Anyone who has ever seen "burning" Frisian schnapps glasses and heard the authentic Frisian spirit saying will rave about this spectacle again and again. Experience Frisian customs in a particularly beautiful facet - the strong, yet mild character of this 56 percent original from the North Sea coast.

For the first time, the tribe of the Frisians was mentioned by Pliny the Elder. In 12 B.C.E. first stood by the Romans, but later became bitter enemies. Before the Frisians were subjugated by Karl Martell and later by Charlemagne, they expanded their territory in the previous centuries. Charlemagne's policies assured the individual tribes a kind of autonomy. At the end of the 8th century, the tribal laws (Lex Frisionum) were recorded.
In the 12th century the so-called "Frisian Freedom" began after the Frankish counts were expelled. It was the system of small rural communities that were organized freely and cooperatively and only subordinate to the emperor. The emissaries of the communities met once a year for the Upstalsboom in Rahe near Aurich. This meeting started with the exclamation "Eala Frya Fresena" ("Stand on your free Frisian!"), To which the answer was "Lewer duad üs Slav" ("Better dead than slave"). The motto in the North Frisian coat of arms.
The end of Frisian freedom began around 1498.

Like wispy light in the moor, it flickers up, extinguish, drink, enjoy quietly in real Friesian way, the Friesian in honor of the Friesian spirit more.
Friesengeistes is a pure, high-proof grain schnapps that has been mixed with fruits and herbal extracts.