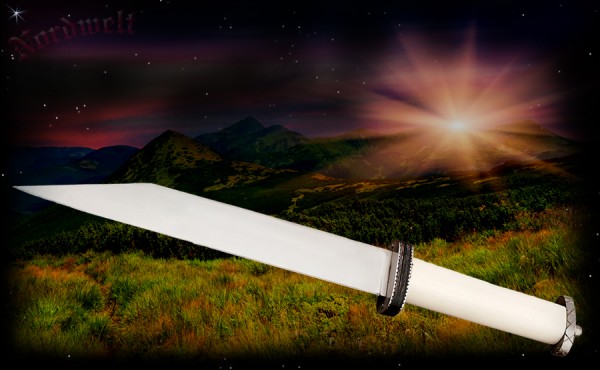 Wikigner short sax with bone grip. According to historical models.
The short sax was very popular as an inexpensive weapon among Germans and Vikings and served well both in everyday life and in combat. The sax is based on historical models from the Viking era, as was common in Scandinavia and England, where many of these bowie knife-shaped sax blades were found.

The sax was not only widespread among the Vikings, but also among the Anglo-Saxons, Franks and other Germanic tribes where the sax was used not only as a "machete" in the house and yard, but also as a handy weapon in combat.
The short sax of the Vikings is made of carbon steel and is sharpened.
Particular attention was paid to the design of the handle section - made from cruciform iron and real horn, it is a real eye-catcher!


The short sax has the following dimensions: