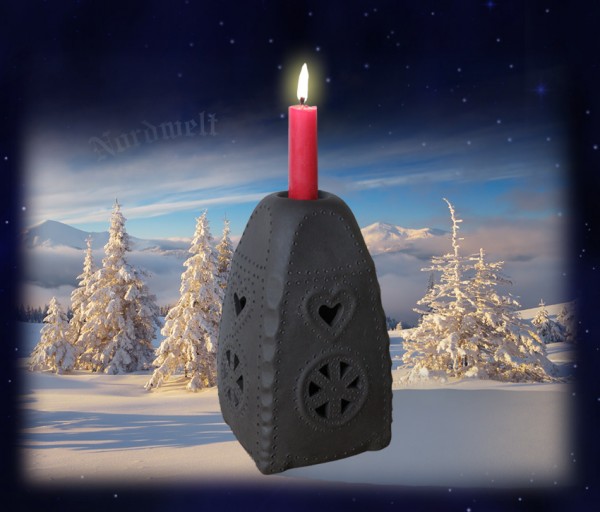 The heart symbol serves to re-feel the life pulsar. The Hagall Rune (younger Futhark) symbolizes once hail and snow and in the deeper sense (according to the existential law), the event patterns of the past acting on the present shaping (in the picture of the devastating hail, after his melt the green land refreshed releases).
Thus, Hagall symbolizes the energies that have developed in the past to the present day.

In ancient times, the solstice ceremony was carried out as follows: During a certain (regionally different) period before the winter solstice on 21.12. The candle stub of the last year (which had to be kept in a special container throughout the year) is put into the candlestick. The sun, which has not yet turned, is symbolized by the light projection of heart and rune in space. The light must never go out. On 21.12. at night, the burning candle is put on the candlestick - the sun has turned, has, as people say, gone over ... The candle remains then (also regionally) different lengths on the candlestick, in the Alpine region mostly until after the rough nights (6.1.). The stub of the last candle stays in that special place to illuminate the next solstice.

Symbolizes in its form the midnight mountain. The migration of peoples from Ostfriesland to far into Scandinavia gave rise to the custom of placing a small candle under the candelabrum as a symbol of the departing year. At the solstice - at the time of the returning light, a candle is lit on the candelabrum both as a symbol of the victory of light over darkness, as well as for the eternal cycle of becoming and passing away.

The Yul candle-holder / Julleuchter is new and was made from natural-colored  dark brown ( almos black) clay according to original models.