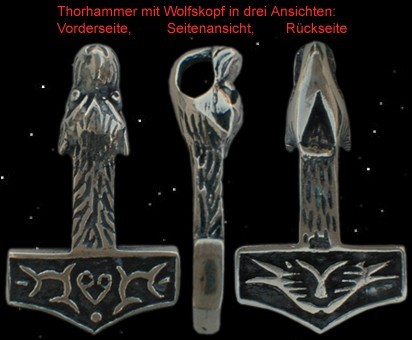 Description Evaluations 0
Description
Thor, who was the strongest of all the ancient Norse gods, was very revered. God of storms and... more
Close menu
Product information "Wolf head Thorhammer "Geri" Thor's hammer, made of 925 silver"

Thor, who was the strongest of all the ancient Norse gods, was very revered. God of storms and lightning, Thor slain trolls and man-eating giants, and ensured good harvests.
Thor, son of Odin and Jord, was given two sons, Magni and Modi, by his wife, the giant Jarnsaxa.
Thor rules in the Bilskinir Hall, his palace in the realm of Trudheim, and he proudly carries his Mjölnir hammer. The "Thorhammer" was once forged by the dwarves Sindri and Brokk.
Thor draws his strength from his belt Megingjardar and his iron hand Jarngreipr.
As today, the Thorhammer was worn for centuries by pagan people to protect them from danger. The Thorhammer is THE symbol of pagan belief.

An attribute of Allfather's Odin or Wotan. His two wolves Geri and Freki (Gierig and Frech) accompany him on his walks to the people. They guard and protect the 540 gates of Valhalla, through which the heroes, the fallen heroes, enter.

The Thorhammer is cast from 925 silver. It is decorated on both sides with ornaments.