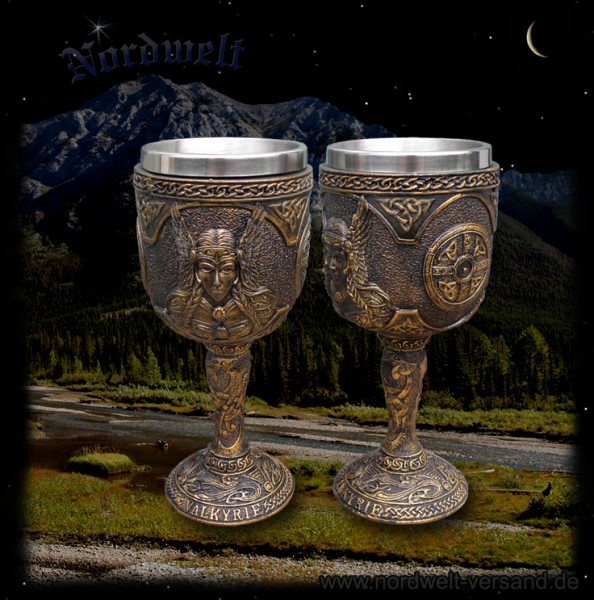 Valkyrie also slaughter or shield maid from the entourage of the god father Odin (Wotan). The Valkyries gave the Einherjern the last escort from the battlefield to Walhalla to the godfather, god of war and death Wotan (Odin).

The Valkyrie waits at a distance on the edge of the battlefield to guide the fallen heroes to Valhalla. Only those who find death on the battlefield are chosen by the Valkyries. All others are expected from the goddess Hel after the death in the underworld.
Valkyria is the Old Norse word for Valkyries. Wal stands for "bunch of slain" and kyria stands for "voter". The warriors are both Odin's helpers and his daughters. They fulfill the wishes of the Allfather, choose the warriors who fell in battle and bring them to Him. The Valkyries can also intervene in battles and determine fate. The function of the Valkyries is therefore similar to that of the three Norns. It is believed that the youngest Norne Skuld was also a Valkyrie.
The warriors, like the Einherians, live in Valhalla. Your residence in Valhalla is Wingolf, the Hall of Friendship.
In the Northern Lights, the Vikings saw a sign of the presence of the Valkyries on Earth. A great battle was fought somewhere on earth, they believed. The moon reflected the golden armor of the Valkyries when they rode across the battlefield and chose the Einherjers. This brought the aurora to the sky.

Bronze-colored chalice "Valkyrie", made of polyresin (artificial stone) - insert made of stainless steel, removable for cleaning.

2 valkyries adorn this chalice with ornaments from Nordic mythology, also the inscription "Valkyrie"!

The photo shows the article from two sides!
Price per goblet!