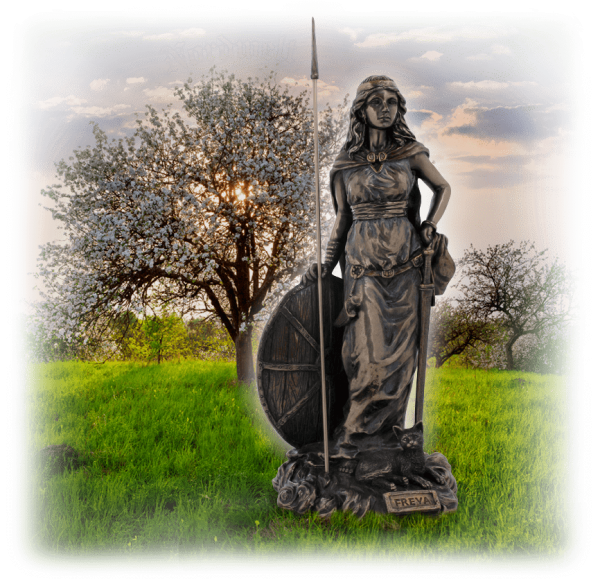 "Freya" goddess of love, fertility and spring statue / figure, bronzed, made of polyresin

Freya / Freyja "was originally the address for mistress and only later" Freya "became the proper name of the goddess.
Freya is also considered the mistress of the cats. Her chariot is pulled by two cats through the air and above the clouds. Fraya's cats have the names Bygul (bee gold / honey) and Trjegul (tree gold / amber).

The ladybug is considered sacred to the animal of the goddess Freya. The seven-point beetle was considered a lucky beetle. The number “7” is also considered a lucky number in various natural religions and is often related to the four elements: water, fire, earth, air, and the three divine symbols: sky, sun and moon.
In the Russian (Indo-European) language "семья" (sem'ya), translated "family"; from the syllables "sem" (seven) and "ja" (I), so the seven generations before me and I! ! To be understood as ancestral heritage and to honorly carry on the good name of the seven generations in front of you and bring no shame on it.