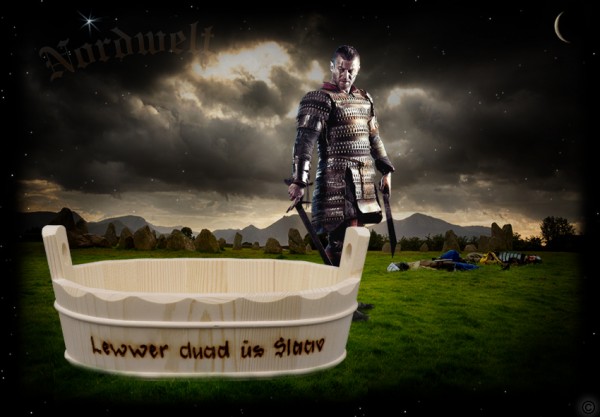 Wooden bowl in the form of a tub with 2 handles - made from untreated spruce, can also be used as a bread basket.
Old Frisian motto and exclamation: "Lewwer duad üs Slaav" (rather dead than slave) burned on both sides with the soldering iron.

For the saying "Better dead than slave" there are Depending on the region, the spellings:

Lewwer duad over Slaav
"Unity and freedom for the Nordland peoples", the call to freedom rings louder and louder all over the country. The vow once sounded in Friesland: "in life, in death - despite the tyrants".

At times, many a place of lies and deceit, everything wronged to us sacred through injustice and oppression. An end to the devastation, the ancestors to the example; half dying, half alive - in the right hand the sword that we are handing over to our children. - The final warning becomes our heirs' duty: Lewwer duad üs Slaav.
The sword consecrated with only one oath. The embers blaze, the blade sparkles in the light. Carried for generations in honor, the gods to please, the enemies to fear. If the earth trembles, the swords flash in the raging battle towards victory. The legacy rings forever: Lewwer duad üs Slaav!

The hand-burned saying is on the front and back of the bowl.

Price per bowl - without decoration shown!