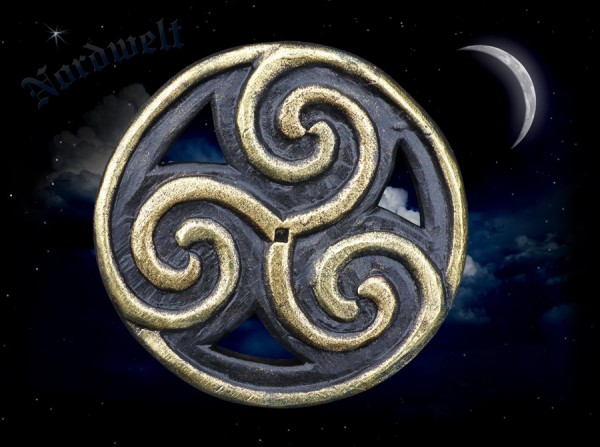 The triskele, also the triskel, triplet spiral (tripod) is a Celtic symbol in the form of three "running legs" arranged in an equilateral triangle or generally open spirals / snails.
In general, this symbol, for which historical models can be found, for example, in Irish Newgrange, is assigned to the pagan triad symbolism.

The spiral of three also reflects the three-figure goddesses we know from the Celtic trinity: Brigid (as the virgin), Danu (as the mother) and Anu (as the old woman)
The triskele symbolizes the fertility of the sun. Similar to Swastika, the Triskele also stands for the annual course of the sun. The triskele is based on the trinity and not like the svastika the trinity.
It stands for the three sister goddesses: Banba, Fotla, and Eiru, who also once ruled over Irrland. To be sybolized, to be and to pass away. - The young girl, the mother, the old woman
It is an old sun symbol, the rays of which flow outwards and ultimately always return to its center from which all energy comes and is thus the spiral of life par excellence.
As the old Druidic symbol of Ireland, presumably dating from the Bronze Age or even older, it is the sun symbol of the Celtic and Nordic cultural areas.