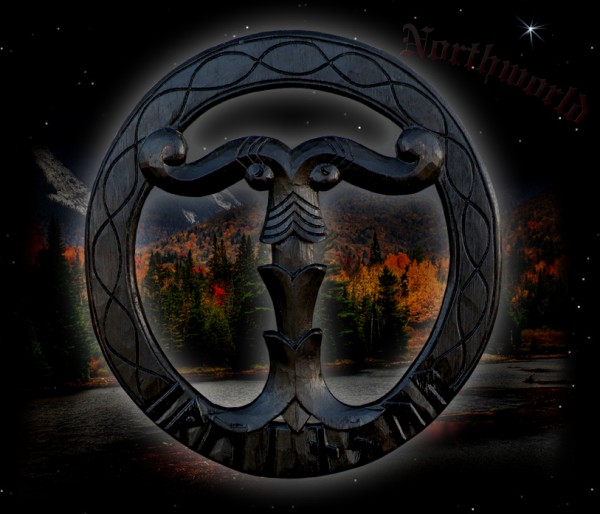 Irminsul in a circle with runes, fruit wood hand made (treated)

The Irminsul (from irmin = mighty, divine, large and sul = pillar) or also the Irmens pillar was an old Saxon main shrine. It will have been a large oak or wooden column ...

Its exact location is unknown, but it was probably near Eresburg near Obermarsberg (in Germany), as the formulations in the Annales regni Francorum ("Franconian Imperial Annals") suggest in 772.
Other possible locations include: a. the Externsteine ​​and the Velmerstot. The Irminsul was destroyed by the Franks at the instigation of Charlemagne in 772 during the Saxon Wars.

The Irminsul was said to symbolize the connection between heaven and earth. The monk "Rudolf von Fulda", to whom we owe the only more detailed information on the Irminsul, writes in the Translatio s. Alexandri (chapter 3): "Truncum quoque ligni non parvae magnitudinis in altum erectum sub divo colebant, patria eum lingua Irminsul appellantes, quod Latine dicitur universalis columna, quasi sustinens omnia." - "They also worshiped a block of wood (or: log) of no small size that had been raised upwards (sc. The Saxons) under the open sky, which they called" Irminsul "in their mother tongue, which in Latin means" All -Column "means because it carries the universe in a way."

A (rest) version of an Irmin column, apparently of Roman origin, is now in the Hildesheim Cathedral in Lower Saxony (Germany).
A reference to "the" Irminsul is unclear. Incidentally, nearby are the towns of Irminseul / Irmenseul, Segeste, the Drachenberg (Dragon mountain) and the Wormstal - which could even indicate the song of the Nibelungen.

Among other things, there is a memorial in Irmenseul in the Hildesheim district in Germany (approx. 9 kilometers from our company).

Suspension on the back.