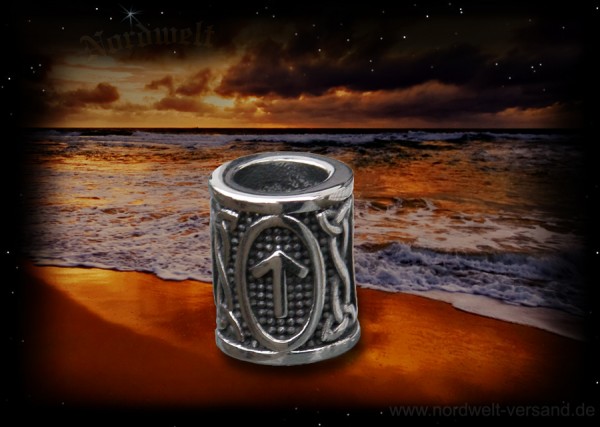 Original Germanic Teiwaz, Tiwaz; Indo-European Deiwos means God.
Tuesday (Tistag, Tirsdag, Tyrsdagen, Tuesday), the day of Tyr, the god of things, struggle and war.
The rune is assigned to the god of war “Tyr”, who is also known as the god of battle and victory, but on the other hand is also the keeper of the legal system.
The root of his name suggests that Tyr (Tiu, Ziu, Zio,) was originally the supreme sky god, who was later ousted from this position and declared Odin's son.
Especially in the North Sea-Germanic region, Tyr was and is revered as the supreme god and god of war. With the Frisians, the god of war Tyr was probably replaced by the god of war Weda (Wodan)!
We remind you of the Biike burning, which was lit on February 21 as a victim fire in homage to the god of war. The custom of biike distilling has been somewhat forgotten, but has recently revived - and not only in the North Sea-Germanic region, e.g. on Sylt, Amrum or Föhr.

The signs of the zodiac are ancient - behind them is a myth that is becoming increasingly understandable to us.
Tyr was at the center of this heavenly god - circle of life, which is why it is originally called the Tyr circle.
With increasing displacement of Tyr by Wotan, he then becomes the main and right God, as well as the (protector) of the Thing assemblies.
The "Tierstein", as we know it from the Harz Mountains, is most likely an old thing place in honor of the god of law Tyr.

A typical geographical term in this regard is e.g. the "Tierstein" - but probably in the region of the Harz most places in honor of Tyr have been forgotten.
The Tyr rune, also known as the arrow rune, stands for struggle, courage and assertiveness, as well as for justice.

The rune is shown 3 times on each bar sleeve.

The photo shows the beard sleeves from different perspectives!