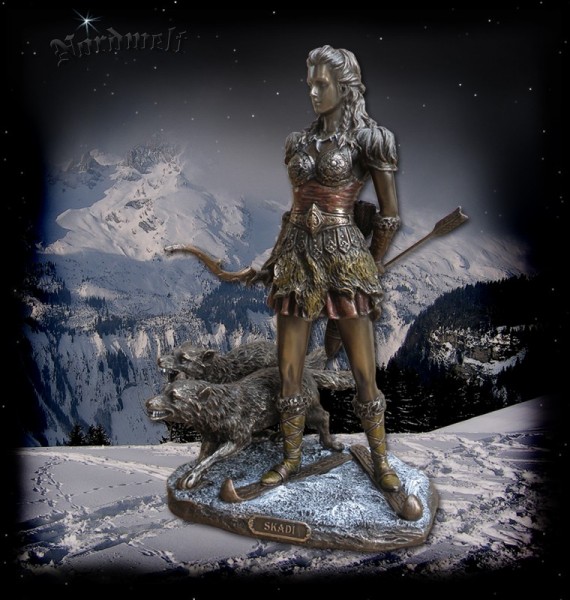 Skadi the goddess of hunting and winter, figure / statue, bronzed, made of polyresin

Skadi - goddess of hunting and winter, accompanied by the wolf.
Sculpture Skadi, Skaði , or Skade the goddess of winter, snow, ice, ski goddess and hunting.

After the gods killed Skadi's father Thiazi, she traveled to Asgard to atone for his death. She asked for a husband and that she would be laughed at. The first request was granted on the condition that she only choose her future by feet. Skadi chose Njörðr based on his feet, although she hoped for Baldur. The second request was fulfilled by Loki, who made her laugh with a goat. He tied his testicles to the goat's goatee with a ribbon and began to "pull the rope". Overwhelmed by this silly sight, Skadi burst out laughing. With that she was reconciled with the Ases. Odin himself repented by throwing her father's eyes up at the sky, where they shone as two stars.
Marriage to Njörðr did not go well - Skadi loved the mountains, Njörd loved the sea. So they agreed to spend 9 nights in one place, but this solution was not successful. Skadi was disturbed by the shouting of the seabirds and Njörd by the wolf howl. So Skadi went back to Thrymhome, where she liked to hunt with the bow.
Later she attached a venomous snake over Loki's head, because he insulted you with nasty damage.