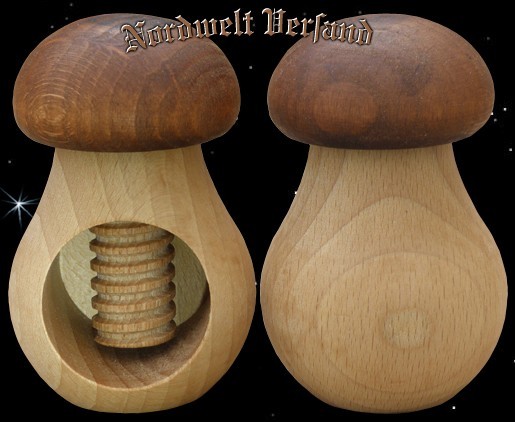 Nutcracker "boletus", made of beech wood

Decorative nutcracker in the form of a boletus - made of beech wood. Cracking hazelnuts and walnuts is child's play for adults and children ...
The nut no longer slides away when it is cracked, and the shell fragments do not fly around because the nut cracks in a controlled manner thanks to the coarse screw thread.

The boletus in mysticism:
Porcini mushrooms, but also other mushrooms can grow in a circle, in popular belief these circles are called witch rings or fairy rings.
The roots of the mushrooms develop in such a way that the mushroom fruiting bodies form a circle or settle in a circle.
In some places these mushroom rings are still used as gathering places for fairies or so-called witches.

Witch or fairy ring in superstition and folk tradition:
When the mushroom circles are formed, the mushroom root system growing outwards in the circle first forms, which then lets the fruiting bodies (mushrooms) grow on the outer edge of the circles.
In popular belief, these witch rings were or are considered to be mystical gathering places for witches or fairies. Entering the circles is said to have magical effects and is therefore also forbidden.

In the fairy or elf ring, some believe that the fairies or elves dance their spiritual dance around midnight ...
(In order not to slip into the realm of the fairies and elves, superstition is considered to be forbidden to enter the fairy ring)

In his work “Albrecht von Halberstadt and Ovid in the Middle Ages” Karl Bartsch published the attempt to reconstruct ancient folk traditions in which, among other things, Forest women (Waltfrouwen) danced and sang in holy circles in a ring dance in circles. These forest women could have been wise women with fairy-like charisma, who were later called witches.
The spiritual “occult” dances in mushroom rings (elf rings) will have a special nature-religious meaning here - in which both the toadstool and the boletus received special attention in the shamanic ritual among the “wise women” (fairies, elves, elves as shapes of light).
The nutcracker "boletus" has the dimensions:

North World - recommendation! Nice gift idea - not only for the Yule Festival.

Suitable for children from 3 years.
The photo shows the front and back view!
Price per piece!