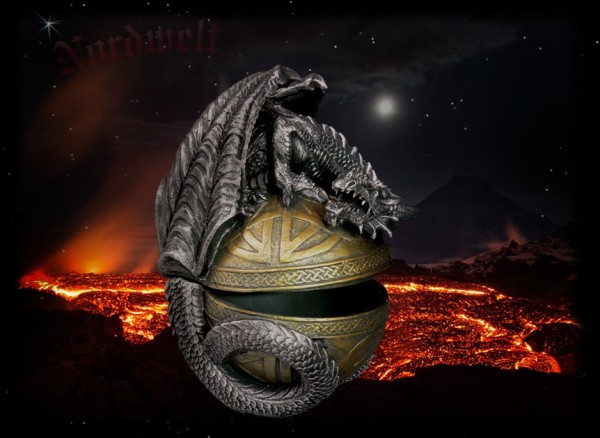 opulent dragon - treasure box, round, painted, made of polyresin

The dragon occurs in many cultures and is considered one of the strongest power animals with its magic and power.
In many fairy tales, legends and legends he is the legendary mythical creature par excellence.
The dragon is on the one hand the human-friendly protector / guardian and lucky charm, on the other hand it is considered the cruel fire-breathing monster and beast that needs to be defeated.

The kite in the world of myths and legends
Western dragons are very different from their eastern counterparts. Legends from European countries portray dragons as giant winged fire-breathing creatures that are mostly feared by humans. Many stories, myths and legends tell of men who fight dragons, overwhelm them and then have access to the riches hidden in the dragon cave! The epic hero Beowulf is just one example of someone who tried to fight a dragon guarding the treasures - Beowulf was subject to the fight and was killed. The defining characteristic of a western dragon symbol is that it represents the epitome of "power".

As the keeper and ruler of the 4 elements of fire, water, air and earth, the dragon is the form of expression of the forces of nature. His strength should not be directed against his human soul partner, but rather to help him to rearrange / sort and overcome inner unrest and chaos. He is said to give his soulmate energy and energy, as well as the courage to continue - even if it often seems hopeless.

The soul partnership with the dragon helps to learn to understand nature and the connections of the elements fire, water, air and earth with which we are connected.
Let us let these forces of nature flow around us - with all their strength.
As a power animal, the dragon brings us energy and energy that flows through our lives. The dragon inspires our imagination, but on the other hand lets us stand firmly on earth and in reality.
Characterized by strength and balance, the dragon embodies the lucky charm - but also the defensive power animal, which can also be destructive with the energy of the four elements.

The lid, which is slightly open in the illustration, is removable.
The spherical inner diameter of the treasure box is approx. 3,35 inch (85 mm.)