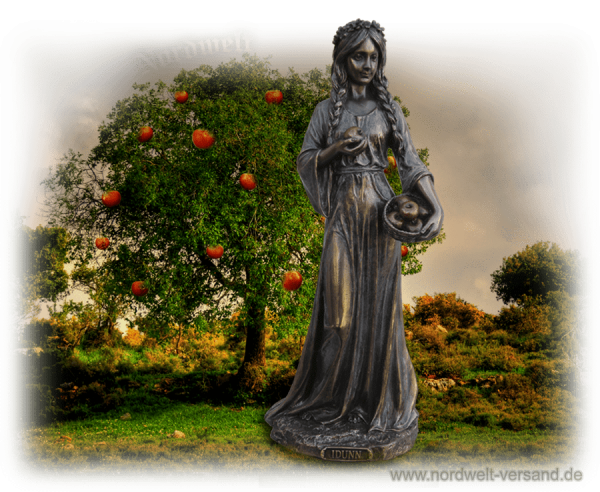 Goddess Idun, (Idunn, Idunna, Idhun, Iduna, Old Norse Iðunn), the renewing, the rejuvenating
She is the goddess of eternal youth, fertility and spring. Goddess of immortality.
Idun is probably one of the loveliest goddesses among the Asen gods. She is the guardian and patron of her apple country, in which there is also the fountain of youth with which the sky water with its healing properties is located.

Idun is the wife of the poet god Bragi, who won her over with a song. Iduna is the guardian of the apple country in the west, where the fountain of youth "Brunnakr" is located. The golden apples she harvests there give the gods eternal youth and immortality.
When Loki was robbed by the giant Thiazi, he only wanted to release him if he delivered Idun along with her golden apples. When this happened, the gods began to age and forced Loki to free the robbed from the giant's power. Loki, dressed in Freya's hawk robe, turned the prisoner "Idun" into a nut and brought it back to Asgard, chased by the giant in the shape of an eagle, from which the refugees only escaped by a hair. Thiazi was killed by the Ases by burning his wings.
Made and cast from polyresin (artificial stone). The figure is fully cast and not hollow and covered with real bronze.