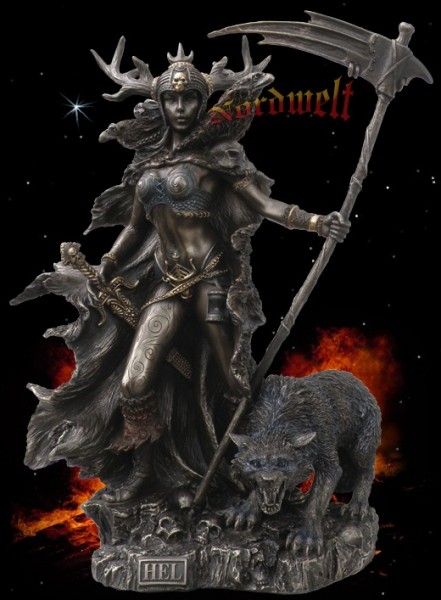 Hel, goddess of the underworld, figure / statue bronzed, made of polyresin

Hel, goddess of the underworld - bronzed figure / sculpture. made and cast from polyresin (artificial stone).

Hel is the goddess of death and ruler of the underworld “Helhome” in Nordic mythology.
Her siblings are the Fenriswolf and the Midgard Serpent “Jörmungandr”. They are the children of Loki and the giant Angrboda.
The upper body of the goddess Hel looks very lively and beautiful, with light, normal skin tone; the lower body, on the other hand, often looks from dark blue to black, is half rotted and decomposed.
Just like her face, her nature is called half white and half black. Like her external appearance, her nature is shaped by apparent contradictions, from very just and lovable to relentless and cruel tendencies.

Helheim is one of Utgard's worlds, which are under the roots of the world tree “Yggdrasil”. Helheim can only be reached via the afterlife bridge Gjallarbru, which crosses the Gjöll river. The bridge is guarded by Modgud and the hell dog Garm.
The residence of the goddess Hel is called Eljudnir (misery), her hall is called Eljudni (plague), the doorstep Fallandaforad (falling danger). The table is called Hungr (hunger) and its knife is called Sultr (embarrassment). Her bed is called Kor (coffin), and the bed curtain Blikjandabol (blinking mischief).
Hels horse is the gray three-legged dead horse "Helhesten": It has blue-black eyes that have an intense bright luminosity. Hel fetches the dead on her horse and brings them to Nifelhome (Foggy world).
The brightest is the deathbringer: wherever his gaze turns, someone soon dies.

Hel feeds on dead bodies. It breaks the bones and eats the pulp from them. The snake-like dead kite Nidhöggr also lives under the Yggdrasil. He torments the dead and experiences the worst agony. Nidhöggr (Niðhǫggr / Eng. "The hateful striker") feeds just like Hel from the meat of the dead. Criminals such as murderers and thieves, adulterers, perjury as well as liars are banished to a special part of Helheim - to Náströnd, in order to experience as punishment what cold, heat, pain and hunger means. Náströnd is the most terrible place you can imagine - where the dragon Nidhögg is raging on the dead.

The kingdom of Hel was designated by Christianity as the place of eternal damnation, the "hell" (English "hell").
Hel is by no means to be regarded as a hell creature, but as a just, but at the same time relentless goddess.
Before Odin became increasingly important here in the north, our Nordic-Germanic ancestors also worshiped the god of war Tyr and the goddess of death Hel in a special way.
Hel has been "demonized" more and more recently - she deserves much more respect, just as she once did in "prehistoric times".

The goddess of death Hel is awarded the Hagalaz rune, which expresses destruction and re-emergence.
The rune Hagalaz or Hagall embodies everything, like the all-mother Holle (Frigga) or Hel - love and justice, birth, but also the cruelty of destruction and banishment.

It cannot be clearly answered whether Frigga, Holle and Hel were once the same deity.
The divine world of the "Indo-European original religion" became more and more tangible over the centuries and divided into more and more gods, just as Tyr lost more and more importance as the highest deity. Odin was increasingly turned.

Similarities, overlaps - depending on regions, tribes, different languages ​​and modified customs led to different appreciations of the gods in the epochs, as well as differences in their names and meanings.
The presented theses do not serve as a definition, but as an example for further possible work studies.

Hel - even if she is a daughter of Loki - deserves anything but "demonized" and "badly done", because she not only receives the criminals, adulterers and Maineidigen, but also the straw-dead people, Ases and Elves in their halls and divides them fairly into their worlds.
We should accept the goddess of the dead with her apparent contradictions, because in the end her decisions and inclinations are shaped by her lovable, but also relentless and cruel nature of extraordinary justice.
Last but not least, we decide by doing what we do, in which of the worlds and death halls we will one day appear. The gods with their special sense of justice let us into the halls that we "deserve" ...

Hel, goddess of the underworld - bronzed figure / sculpture. made and cast from polyresin (artificial stone).