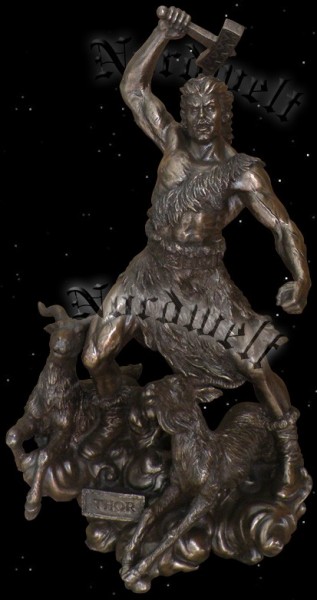 Description Evaluations 0
Description
The Thorhammer was worn and shown with pride. As was then, & still is today, the Hammer was worn... more
Close menu
Product information "God of thunder "Thor", statue / figure / sculpture, bronzed, made of polyresin"

The Thorhammer was worn and shown with pride. As was then, & still is today, the Hammer was worn as jewelry made from gold, silver, amber and other fine materials.
Some Hammers carried Rune symbols on them. These Runes are also known as the Germanic "Futhark" Runes. These make up the basic Rune Alphabet.
Some of our items are decorated with various Rune symbols, each of which is named, and carries with it a special name that invokes the power of the Nordic/Germanic Gods of Old.
Thor is the Thunderer. Thor possesses three wonderous items with him. His reknowned Hammer, named Mjölnir, which when thrown never misses its target.
Thors Hammer is the Germanic equivalent of the Boomerang! Thor also possesses a Magic Belt named Megingjard, and a pair of Iron Gloves from which he throws lightning bolts! The Gods of Asgard are in a constant struggle with the giants known as Jötunn, and the poisonous snakes of Midgard called Midgard Serpent which in Old Nordic is called midgardsormr!
The great Gods of Asgard will one day have a final apocalyptic war with the Jötunn, which is known as Ragnarök. In this time, all of the warrior spirits of the honored dead will rise up along with Odin, Thor, Tyr, and the other gods of Asgard.
In this battle, the end of time comes. The poisonous snakes of Midgard will seek to bite and poison the righteous warriors, but they will have a suprise coming for them! The very poison the snakes have used on others will be used upon them, eventually destroying them all. Then it will be all between the forces of good and evil to fight it out. If the Gods and their faithful fail, all that is, all that was, will be destroyed!
Thor receives three tasks of Utgard-Loki: He must drink from Utgard-Lokis horn and is only able to drain it half way. He must lift a cat up glingt it not, and he must wrestle Elli against the old woman. Utgard-Loki later explained the tasks: The horn from which Thor drank had its connection to the sea. It can never be emptied! In reality, the cat was the Midgard Serpent. The old woman was "Age" the time of life that no one can defeat or fend off.
Thor's war wagon was drawn by Tanngnjóstr from the Old Norse, meaning "the two billy goats".
These are named Teeth-Gnash (Zähnefletscher) also called Teeth-Gnash (Zähneknisterer), meaning "Teeth Cracker", and Tanngrisnir. Thor's wife, named Sif, gave birth to a daughter who they named Thrud, which means "strength". From an affair with the giantess named Jarnsaxa, Thor had two sons, named Magni and Modes, which mean strength and courage, respectively. Thrundhome or City of Strength is regarded as their place of residence. Thrudwang is named as their apartment in Asgard.