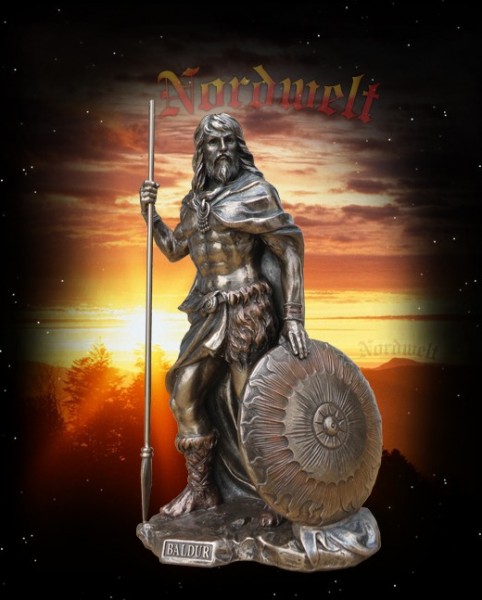 Baldur, sun god, bronzed - one of the many gods of the Teutons and Vikings
Baldur (Baldr, Balder, north. "Shining"), is a god of light, god of truth, purity, justice, beauty and light. Balder is the "shining God", the enemy of all injustices.

Baldur lives in Breidablik in Asgard and owns the ship Ringhorn. One day Baldur has a dream of his own death. His mother Frigg then goes to every animal and plant and asks them to take an oath that they will not hurt Baldur. Only Frigg takes no oath from the young mistletoe because it seems to her to be insignificant. There is a game of the Ases, in which they fire at the now invulnerable Baldur with spears, stones and other weapons, without anything happening to Baldur. Loki takes advantage of the fact that the mistletoe did not have to take an oath. Loki gives Baldur's blind brother Hödur a mistletoe and tells him to use it to shoot. The branch hits Baldur and the god collapses dead.
The body is laid out on a ship that only the giant Hyrokkin can throw into the water. Under the force, the reels on which the ship stood caught fire and ignited the body. Thor blesses the body fire with his hammer Mjölnir. His father Óðinn gives his ring Draupnir on Baldur's last trip to the underworld to the goddess Hel. Baldur's wife Nanna dies of a broken heart during the funeral and is burned together with Baldur.
Hermodr tries to bring his brother back from the Hel realm. But Hel only wants to release Baldur from her realm when all things cry for him. The Ases send messengers all over the world and make all living things and even stones and metals mourn for Baldur. Only Loki, in the form of the giantess Þökk, refuses to please them. As a result, Baldur is refused to return to Asgard.

Made and cast from polyresin (artificial stone). The figure is fully poured and covered with real bronze.