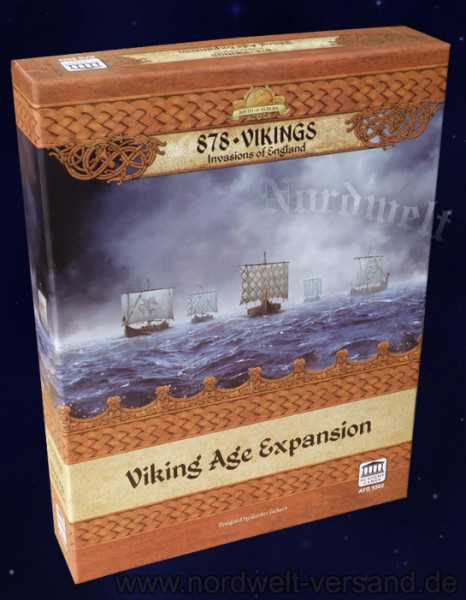 Vikings Age Expansion includes nine expansions that add new strategies, victory conditions, and player abilities to the base game. The expansions may be used separately or together in any combination creating a fun and dynamic gaming experience that can be different every time you play.
War for Land & Gods: The Vikings loot churches, then build forts and pagan settlements in their place. Will Christianity endure?
Kings: Be allied to one of the four English Kings and gain their special powers.
Epic Battle Events: Battles can become epic, with special rules and victory conditions.
Viking Ships: Viking longships move their armies rapidly along the coastlines to flank the English and escape their traps.
Relics & Holy Sites: Use the powers of English holy sites and Viking relics to inspire your troops and forge your fate.
Legendary Leaders: Add legendary Nose Leaders Ragnar and Lagertha to the game to use their special abilities to achieve victory.
Kingdoms: The four Kingdoms of Mercia, Northumbria, East Anglia, and Wessex bestow unique powers to the occupiers.
Runes & Prayer Dice: Test your army's faith during battle and roll the Viking Runes Dice and English Prayer Dice.
Legends: Build your legendary fame iwth special goods and acheivements that influence the Victory Track.
Game instructions in English (excellent English skills are required to play the game)!

Warning!
Not suitable for children under 36 months. Danger of suffocation due to small parts that can be swallowed.