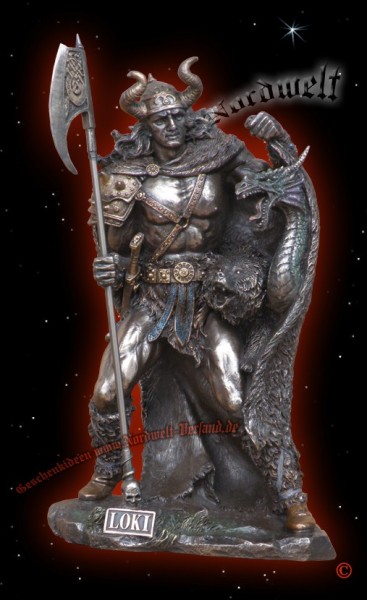 Loki, the cunning one, bronze colored, made of polyresin

Description Evaluations 0
Description
Loki is the god of fire, god of pranksters, god of evil, god of transformation and change of... more
Close menu
Product information "Loki, the cunning one, bronze colored, made of polyresin"

Loki is the god of fire, god of pranksters, god of evil, god of transformation and change of shape, god of cunning. Half god and half giant.

In his craftiness and cunning, Loki represents a model of the mythical "scoundrel". He has a strong sense of strategy and uses it to assert his interests with intrigue and complex lies. Since Loki is half Ase, half giant, his relationship with the Ases also appears to be ambiguous. But Odin respects him; the two even form brotherhoods of blood. Loki also helps Thor with a trick to get his hammer Mjöllnir, which was stolen by the giants. Loki is thus an enemy and friend of the gods. Only after he tricked Hödur into killing his brother Baldur did Odin banish him.

The giant Sigyn gave birth to Narfi and Ali is born to an unknown mother. With the giantess Angurboda, he fathered three enemies of the Ases:
The Midgard Serpent (Jörmungandaal), which Thor, the friend of man, will kill at the end of time
The goddess of death Hel
The Wolf Fenrir (Fenriswolf), which will devour the godfather Odin at the end of the world

He also gave birth to Sleipnir himself (Odin's eight-legged horse): he turned into a mare to lure Savadilfari, the giant's stallion who was to build the castle of gods, from the construction site so that the giant could not meet the agreed deadline . A few months after this event, Sleipnir is born. Loki gave Odin the foal.

Loki is above all the enemy of Balders and the arch enemy of Heimdall. Loki's part in the death of Balders, the "enemy of all injustices", by causing the blind Hödr to shoot a mistletoe at Baldur, read in Baldur's dreams. With this act Loki initiates the downfall of the world of the gods.

Made and cast from polyresin (artificial stone). The figure is fully cast and not hollow and covered with real bronze.